As with the ios project, we have 3 different targets to build:

Each target can be build in debug or release config:

This is reflected in the androids projects src structure: 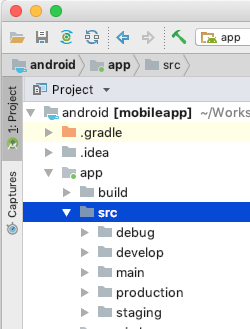 Whatever can be found in debug will be included in all Debug versions:

Files in staging are included in

The instructions here apply only to new modules. The modules/libraries already installed in the Trustlines app are correctly linked and generally you shouldn't have to do any of the described actions below.

Some React Native libraries often come with platform-specific (native) code. Since React Native 0.60 the native code can be installed by a process called autolinking. Autolinking means that you as a developer don't have to do anything else than yarn install. The rest is "automagically" taken care of.

Some native libraries though still don't support auto-linking and because of that after installing a library that has native code you'll need to run react-native link <packageName> to install the native code.

react-native link should not be called without the packages name!

How to completely integrate a native module might vary and usually is described in the modules repository description. Always recheck / diff your files for changes after you call react-native link <packageName> and if it reflects what you anticipated.

When running the application in the android simulator, you can not easily use the camera and interact with the app as you would do with a physical phone. You can send remote commands to the simulator though. To open the QR code link to create a new trustline, you can start the VIEW intent, passing the URL copied from the QR code screen.

This basically does the same as clicking the link inside the messages app.